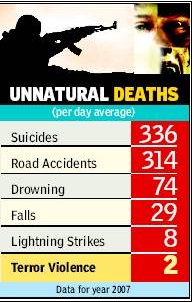 ‘Terror kills, but panic later not proportional to actual danger’ read the headline of an article in the Times of India after the 2008 Mumbai terror attacks. The statistics displayed at the bottom of the article sparked a conversation amongst my friends and some questions were raised.

“I think comparison criteria are wrong. Why don’t they compare victims of terrorism in different countries? That would be an interesting study”

Of course, I had to get to the bottom of this. So here’s what my research shows:

Let’s deal with the easy one first. The US government says that about 100 people die every year by lightning. But the National Crime Bureau in India says that about 2553 and 2113 were killed by lightning in 2008 and 2009, respectively. [See reference. PS: Alex… Jeepers!!]

As for the deaths by terrorist attacks, let’s look at the global figures. The US does most of the research, of course. In 2006, 14000 attacks took place mostly in Iraq and Afghanistan killing 20,000 people. [See reference] In 2005, 11000 attacks took place killing 14,600 people. [See reference, it verifies the figures mentioned in the MSNBC report]. FBI reports 15,765 deaths in 2008 due to terror attacks [See reference, report goes into a lot of details.]  For data before 2005, see this (The numbers are so much lower!).

I couldn’t find numbers for 2010 but from the above we can imagine that the number is in the 20,000s or less. Now compare this to the 1.2 million deaths that occur annually due to traffic accidents around the world. The article had a good point to make.

5 thoughts on “Deaths due to terrorism”