Review of Joshua Foer’s Moonwalking with Einstein, as part of my #100bookschallenge.

Moonwalking with Einstein is the story of a journalist who went to cover the 2005 US Memory Championship as an assignment for an article, and then went on to win the 2006 event. He got so obsessed with the people and their achievements that he decided to try it out himself. In that one year he with trained by men which by normal standards would be called freaks of nature. They could memorise the order of a deck of cards in under 30 seconds or 800 random digits in 15 minutes (full list of records).

Foer interspaces his year with the history and science of memorising. He walks the reader through the time when poets committed to memory the works of other poets so that it could be passed down the generations. There is a record Socrates’s outrage on the use of writing and the amount of stress that was given on memory training during the time before the printing press. But Gutenberg’s invention was the final nail in the coffin for those memorisers, because common people could then start to rely on books as an external form of memory. 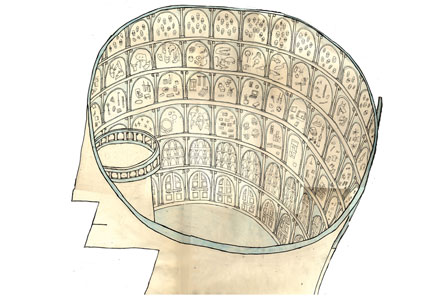 Since Gutenberg there were some attempts at renewing this lost art, but it wasn’t until the likes of Tony Buzan in the late 20th century that it finally happened. Buzan built an industry around the tools and methods of increasing one’s memory, and even founded the World Memory Championship. He sold improving memory as being akin to increasing intelligence.

And although IQ scores do not depend on the use of one’s memory, there is still a good case to be made for putting in the effort to expand it. After all, new ideas are only mashed up versions of old ones. However much easy it has become to store our memories in external devices, without internalising them once again they are useless.

There is now a large community of people who use these age-old techniques (and comes up with new ones) like that of filling memory castles with outrageous images to help them commit to memory things like lists, random numbers, binary digit sequences, decks of cards, poems etc.

This is what Foer trained himself to be able to achieve, and eventually won the US competition for it. What Foer convincingly demonstrates through the book, based on scientific research and his own experience, is that expanding one’s memory is only a matter of deliberate practice.

What Foer achieved is no mean feat. But, at the end, despite being a great story, Foer’s increased memory does him little good in his daily life where paper, computers and cell phones can often handle the task better. Sure he can memorise many phone numbers, lists and even complete poems with relative ease, but he still carries with him his dictaphone and notebook. And although he doesn’t say this explicitly, it seems his memory expansion was only for things that are well-defined, clearly laid and can be written down in lists.

2 thoughts on “The art and science of remembering things”