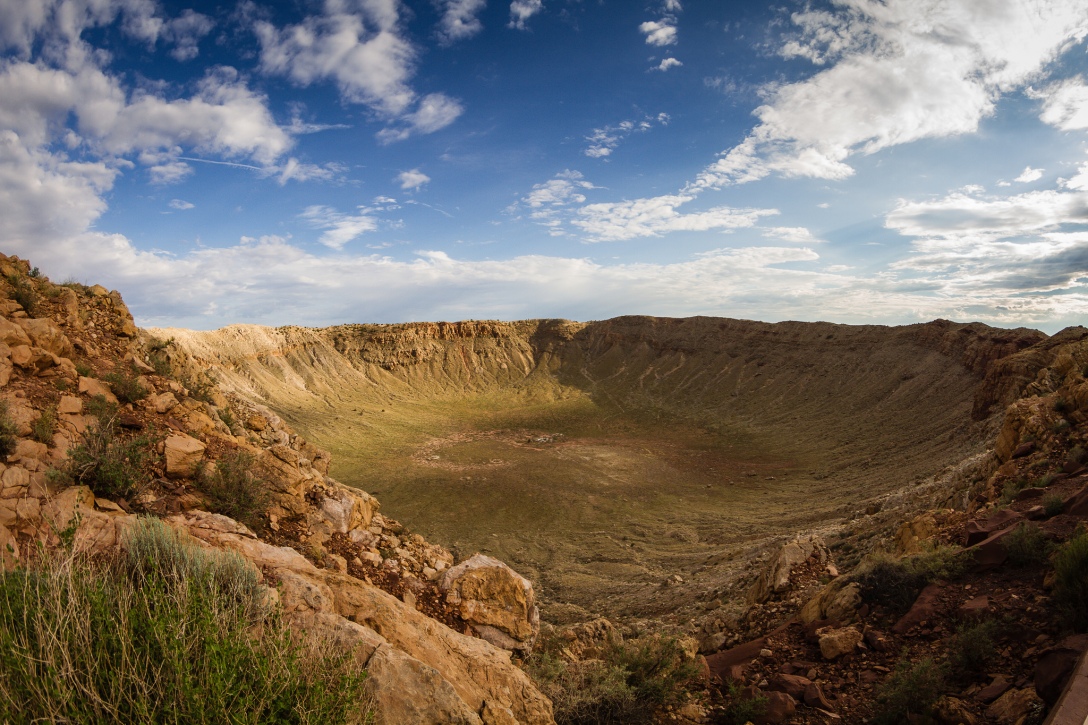 Meteorite impacts can be very destructive. One that fell in Mexico around 66m years ago created a 180km crater and caused the extinction of dinosaurs while spewing debris and molten rock into the air. Now, in what is a fascinating tale of serendipity, researchers have found that these events don’t entirely destroy all traces of life at the site of impact. Molten rocks can capture and preserve organic matter as they cool down to form glass beads.

When a meteor enters Earth’s atmosphere, the air around the meteor gets very quickly compressed causing it to heat up, scorching everything in its path. Most of the time that is where the story ends, as the meteor burns up in the sky as a “shooting star”. But sometimes it is big enough to reach all the way to the surface and transfer its remaining energy to the ground.

This energy is dissipated, as mild earthquakes, sound shockwaves – but mostly as heat. The heat energy can be so great that it melts rocks on the surface and hurls them up in the atmosphere. Anything that comes in contact with this molten rock would presumably get burnt, leaving nothing but rocky material that cools down in the atmosphere, forming glass beads and tektites (gravel-sized natural glass). This is what City University of New York researcher Kieren Howard assumed, but he was able to show that his assumptions were wrong.

For his PhD, Howard was studying the glass beads and tektites found near the Darwin crater in Tasmania. The 1.2km wide crater was created by a meteorite impact about 800,000 years ago.

The natural glass formed during cooling is (as implied by the term glass) not crystalline. Instead of a regular arrangement of atoms, the atoms inside it are randomly arranged. Howard’s analysis, however, kept showing the presence of crystals. At first, he dismissed this as a problem with the machine or with his method of analysis. But when it kept showing up, as a good scientist, he thought he should ask an expert to look at his data.

“This is unusual,” says Chris Jeynes, a physicist at the University of Surrey. “If there were indeed crystals, then it was the result of uneven cooling, which can occur when something gets trapped inside these glass beads.”

Jeynes used proton-beam analysis, a method to peer inside the glass to reveal its elemental make-up. Inside he found carbon. “Howard had no idea what his samples were, and he was very surprised when I told him,” Jeynes says.

The natural glass formed should contain only silicon, titanium, oxygen and other metallic elements in trace amounts. Detection of carbon meant that there was some organic matter inside. The only hypothesis was that, somehow during the formation of these glass beads, they captured organic matter that was floating in the atmosphere. That organic matter might have already been in the air, but it might also include material thrown up by the impact.

Howard then went to another expert to break open these glass beads and reveal what the carbon-rich matter was. It turned out that it included were cellulose, lignin and other biopolymers. This meant that somehow this matter, which originated from plants, had survived the temperature of more than 500°C, which is what the molten rock would have reached before cooling into a glass bead. Usually these temperatures will break down the organic matter, but clearly it didn’t in this case.

Mark Sephton, a geochemist at Imperial College London, was surprised and pleased: “What the results show is that these glass beads can capture an aliquot of the atmosphere of the planet at impact. It is like a time capsule of that ecosystem.” These results are published in Nature Geoscience.

The implications are enormous. It shows that other meteorite impacts, like the one that wiped out the dinosaurs, could have created such time capsules too. Sephton is now working on finding glass beads from other impact sites to reveal information about Earth’s ancient atmosphere.

This method of analysis means that we could also go looking for similar beads on other planets, like Mars, where meteorite impacts are common. They could also reveal vital information about the past atmosphere of those planets. Maybe they captured organic matter – if it ever existed there.

“We would not know any of this if it wasn’t for Howard,” Jeynes says, adding that Howard’s persistence to find out what “the wrong results” were led the researchers to a phenomenon that nobody knew existed.