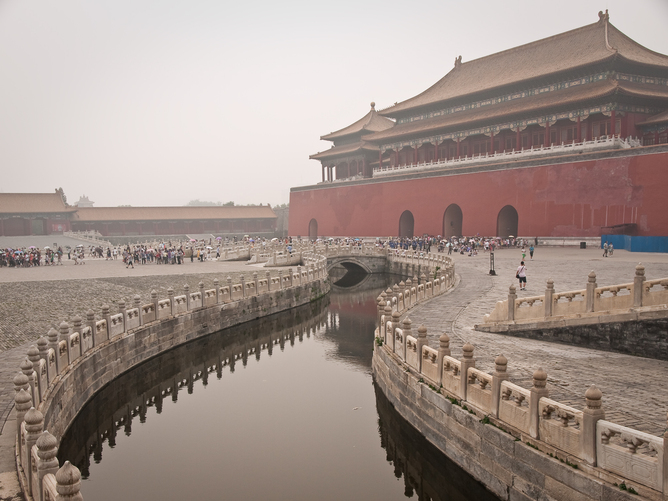 While visiting and enjoying the architecture of the Forbidden City in China, three researchers wondered how large rocks weighing many hundreds of tons were transported to the site more than 500 years ago. A relaxing holiday became a science project and, in a paper just published, they reveal calculations to show the most likely means of achieving this feat was by using wooden sleds on artificial ice paths.

Built in the early 15th century, the Forbidden City consists of an imperial palace and nearly a thousand buildings. It served as the figurative centre of China’s capital city. During the researchers’ visit, Howard Stone, professor of mechanical and aerospace engineering at Princeton University, saw a sign that mentioned the use of an artificial ice path to transport the enormous stones used in the city.

However, a look at the history of technology in China revealed that wheels existed in China since the 4th century BC. Why then would there still be a need to use man-drawn sleds? asked the researchers. Was it a better method? “That is when we began to investigate and calculate,” said Stone.

With the help of Jiang Li, a mechanical engineer at the University of Science and Technology Beijing who studies tribology (study of friction), they dug into the literature to find more details on the efforts involved in transporting these stones. One document said that a monolithic slab weighing 112 tonnes was moved over 70km to Beijing in 1557.

Chinese wheeled carriages would not have been able to transport such blocks, even with the technology of late 1500s. The other idea would be to use wooden rollers, but that would required creating a smooth road on tricky winding roads.

Calculations published in the Proceedings of the National Academy of Sciences reveal pulling such stones over bare ground at a rate mentioned in the historical text would require more than 1500 men. Even sliding the stone on bare ice would need 330 men. However, one solution from the researchers, which involved tobogganing the stones on wooden planks and lubricating the path with cold water, would only need 50 men for that load.

A weather analysis of the last 2000 years in China finds the average January temperature in Beijing in the 15th and 16th century was about –4°C, which would have been enough to create and maintain artificial ice paths. While historical records reveal that more than a million workers were involved in the construction, details about the construction activity are hard to find.

The Chinese were at the forefront of the study of friction at the time. Chariots preserved with the Terracotta Army, which is more than 2000 years old, showed they even used wheel bearings to reduce friction.

Regardless of whether or not they are able to prove that tobogganing massive stones played a part in the construction of the Forbidden City, for Stone the pleasure was in following up the story. “Recognising the degrees of planning and implementation used more than 500 years ago for such a massive undertaking was humbling.”