The Aam Aadmi Party has done the impossible. One month ago, the Facebook class of India loved them for showing what Indian politics really needs. Now they hate them for doing things that we won’t expect even corrupt politicians to do.

To understand this schizophrenia that the AAP has created among the educated middle class of India, we need to look at our own expectations. The success of Kejriwal in the Delhi elections, we thought, was the result of our disgust of the current political class. We hate those politicians who go after vote banks only so that they can fill up their own pockets with bribes. We wanted someone who could clean the muck and put worthy leaders in charge. Like Obama, he was the beacon of hope in a mess that had been decaying for decades.

As soon as he took up his place as Delhi’s chief minister, we expected Kejriwal to behave like a model chief minister—honest, sober and efficient. We wanted him to get things done. But unlike Obama who crushed the American dream after being re-elected, Kejriwal’s party members seem to be on track to crush our dreams within months of being in the government.

The law minister Somnath Bharti was accused of taking law into his own hands. The resident poet Kumar Vishwas was caught on camera making racial comments. And the leader Kejriwal was blamed to act un-statesmanlike when he resorted to protesting against his state’s police—something no chief minister had ever done before .

And yet, we must realise that Kejriwal is smart to know that pandering to our desires is impossible in the few months he has before national elections. He is partly right to blame the media for creating a hate campaign, for whom he has been a bonus. With Kejriwal, the media has one more top politician to poke beyond Rahul Gandhi and Narendra Modi.

Kejriwal’s best strategy for the national elections is going to be the same strategy he had going into Delhi elections—try to get enough seats so that AAP can be a trouble-making opposition. And for achieving that goal, it would be best to stick to the principles that won him Delhi. Something that even the Congress and the BJP have admitted to learn lessons from. The principles were to provide the people an alternative to the current crop of filthy politicians.

Of course, national elections are going to be a whole different game. Delhi’s population is all urban, but India remains largely rural.

He succeeded because he acted as he had done for many years before—like a revolutionary. While it would be foolish think that he does not enjoy the power of being a chief minister, I would like to believe him when he says that he does not want that power if he has to compromise on his ideals. The Congress can pull remove their unconditional support and he won’t be chief minister anymore.

At this point I should disclose that I do not support Kejriwal’s economic policies, at least the ones he has shown so far. But I’m willing to experiment with having a clean politician who improves the functioning of the government and exposes its predecessor’s wrongdoings, even if the immediate effect on people’s lives will not be beneficial.

Rise of the muffler man 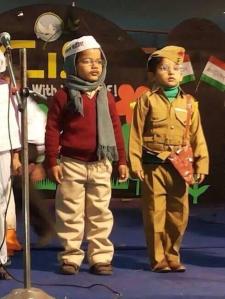 I like Vir Sanghvi’s clarity of thoughts. That is why when he said, “Kejriwal has become no more than a media-blaming, vote-bank politician”, I entertained his well-laid arguments seriously. Sadly, the conclusion drawn is only partly right.

Yes Kejriwal blames the media, but he is no vote-bank politician. Sanghvi’s analysis fails because he is being short-sighted. He claims that giving free water and cutting electricity prices in Delhi will get Kejriwal votes at the national level.

Kejriwal got into politics to play the long game. He recognises that what few votes he can get at the national level will come from exposing the tainted politicians, offering a good alternative and listening to the vast majority of people. He is moving the debate away from pitting personalities against each other to talking about values and ideas.

Like in Delhi, there is no way that AAP can form a majority government at the national level this year. It would be lucky if it even played a small part in forming the government. Instead, the AAP is aiming for the election of 2019. In five years, the party will have matured and the country will have grown tired of Modi. That would be the time when AAP will be a serious alternative—something Indians have been wanting for decades.