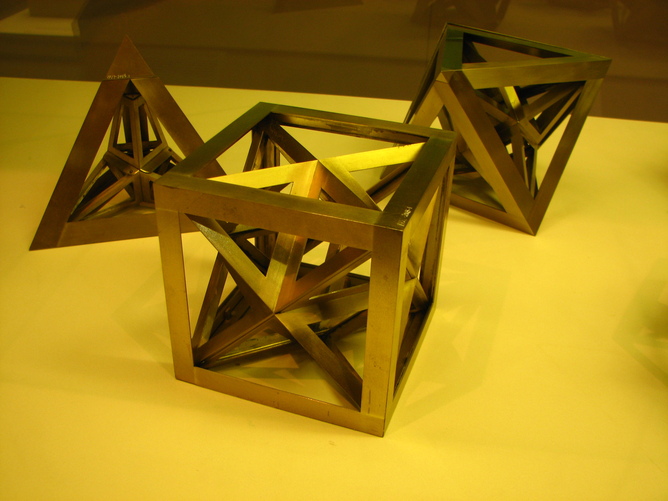 The works of the Greek polymath Plato have kept people busy for millennia. Mathematicians have long pondered Platonic solids, a collection of geometric forms that are highly regular and are frequently found in nature.

Platonic solids are generically termed equilateral convex polyhedra. In the millennia since Plato’s time, only two other collections of equilateral convex polyhedra have been found: Archimedean solids (including the truncated icosahedron) and Kepler solids (including rhombic polyhedra). Nearly 400 years after the last class was described, mathematicians claim that they may have now identified a new, fourth class, which they call Goldberg polyhedra. In the process of making this discovery, they think they’ve demonstrated that an infinite number of these solids could exist.

Equilateral convex polyhedra share a set of characteristics. First, each of the sides of the polyhedra needs to be the same length. Second, the shape must be completely solid—that is, it must have a well-defined inside and outside that is separated by the shape itself. Third, any point on a line that connects two points in the shape must never fall outside of it.

Platonic solids, the first class of such shapes, are well-known. They consist of five different shapes: tetrahedron, cube, octahedron, dodecahedron, and icosahedron. They have four, six, eight, twelve, and twenty faces, respectively.

The discovery of Goldberg solids comes from researchers who were inspired by finding interesting polyhedra in work that involved the human eye. Stan Schein at the University of California in Los Angeles was studying the retina when he became interested in the structure of protein called clathrin. Clathrin is involved in moving resources inside and outside cells, and in that process it forms structures that adopt a handful of shapes. These shapes intrigued Schein, who came up with a mathematical explanation for their formation.

During this work, Schein came across the work of 20th century mathematician Michael Goldberg, who described a set of new shapes that have been named the Goldberg polyhedra. The easiest Goldberg polyhedron to envision looks like a blown-up soccer ball, as the shape is made of many pentagons and hexagons connected to each other in a symmetrical manner (see image to the left).

However, Schein thinks that Goldberg’s shapes—or cages, as geometers call them—are not polyhedra. “It may be confusing because Goldberg called them polyhedra, a perfectly sensible name to a graph theorist. But to a geometer, polyhedra require planar faces,” Schein said.

So Schein and his colleague James Gayed decided to examine whether Goldberg-like shapes could form actual polyhedra. A new paper in PNAS describes a fourth class of convex polyhedra that they want to call Goldberg polyhedra, even if the name would confuse others.

A crude way to describe Schein and Gayed’s work, according to David Craven at the University of Birmingham, “is to take a cube and blow it up like a balloon”—which would make its faces bulge (see image to the right). The challenge for Schein and Gayed is to keep the inflation from causing the shape to break the third rule: no point on a line that connects two points in that shape can fall outside the shape.

Craven said, “There are two problems: the bulging of the faces, whether it creates a shape like a saddle, and how you turn those bulging faces into multi-faceted shapes. The first is relatively easy to solve. The second is the main problem. Here one can draw hexagons on the side of the bulge, but these hexagons won’t be flat. The question is whether you can push and pull all these hexagons around to make each and every one of them flat.”

During the bulging process, and when the bulges are replaced with multiple hexagons, Craven notes, the process will generate internal angles. One of these angles formed between lines of the same faces—referred to as dihedral angle discrepancies—will control whether or not the face is flat. Schein and Gayed claim to have found a way of making those angles zero, which makes all the faces flat. What is left is a true convex polyhedron. (It’s worth noting that in doing so, the hexagons lose their perfect shapes. They may appear warped, but at least they’re flat.)

Schein and Gayed claim that the rules they have developed to govern this process can be applied to develop other classes of convex polyhedra. These shapes will have more and more faces, and in that sense there should be an infinite variety of them.

Such mathematical discoveries generally don’t have immediate applications, although these are often found later. For example, dome-shaped buildings are never circular in shape; instead, they are built like half-cut Goldberg polyhedra, consisting of many regular shapes that give more strength to the structure.

In this case, however, there may be some immediate applications. The new rules create polyhedra that have structures similar to viruses and fullerenes, a carbon allotrope. If we are able to describe the structure of a virus more accurately, we could get a step closer to finding a way of fighting them.

If nothing else, Schein’s work may prod mathematicians to find other interesting geometric shapes, now that equilateral convex polyhedra have a new family.

This article was first published on The Conversation. Multiple image credits here.