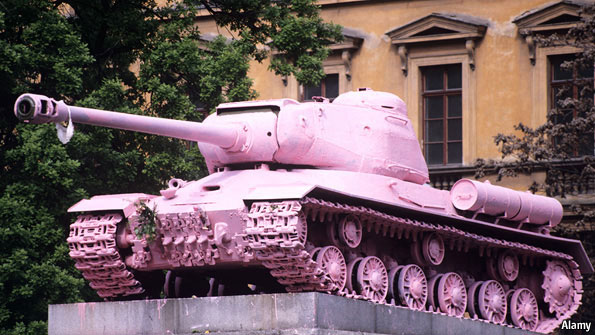 New kinds of paint for military vehicles can detect, absorb and neutralise gases in a chemical-weapon attack

Although there has been no large-scale use of chemical weapons since the Iran-Iraq war in the 1980s, armies need to be prepared for the threat. Part of that preparation means being able to decontaminate people and equipment that have been subject to attack.

The suits and masks worn by soldiers can, if necessary, be thrown away once used, but heavier and more expensive equipment, such as vehicles, cannot be treated in such a cavalier fashion. It needs to be cleaned. At the moment, that is usually done by sloshing it with a solution of hydrogen peroxide. This works, but lugging the stuff around is a nuisance—and so is disposing of it once it has been used. Instead, Britain’s Defence Science and Technology Laboratory, working in collaboration with AkzoNobel, a paints company, proposes to do the job with special paint.

As is often the case with paint jobs, the new anti-chemical-weapon paint needs an undercoat and a top coat. The top coat contains silica gel, an absorbent material that can suck up nerve gas and stop it getting inside a vehicle. This upper layer is available in standard camouflage colours, such as yellow (for deserts) and green (for jungles). The undercoat is made of a polymer that acts like the glue on a Post-it note. It is, in other words, sticky enough to hold the top coat in place, but easily peeled away when that is desirable. If a vehicle gets contaminated its paint can thus be scraped off and dumped by a bunch of squaddies. It can then be repainted without difficulty.

The next stage, currently still in the laboratory, is to develop coatings that change colour when they absorb toxic chemicals, thus alerting soldiers in the area that they are under chemical attack. The details are secret, but a system which responds to mustard gas has been devised, and others are under development. After that, the plan is to modify the coating so that it not only absorbs noxious chemicals, but neutralises them. A group of researchers at the University of Vermont, led by Christopher Landry, have already managed to combine silica gel with a vanadium catalyst to produce a mixture that oxidises mustard gas, rendering it harmless.

In the future, then, military paint will not only hide vehicles from prying eyes, it will also help protect them from one of the most feared forms of attack. The ecstasy of fumbling that follows the cry of “Gas!” may thus become a little less panic-stricken.

Here is a podcast I did for The Economist on August 22, 2012. We discuss interplanetary networking, gas-guzzling paint and new approaches to web publishing and social media.