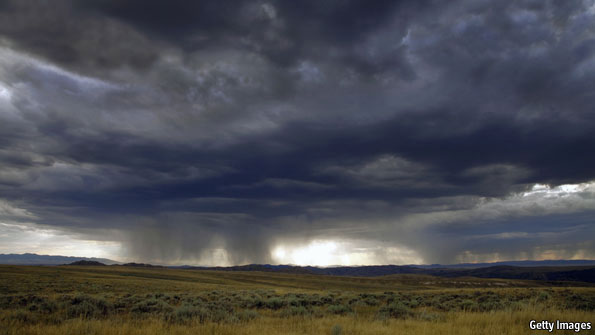 Clouds turn to rain when water droplets and ice crystals that make them up get too big to resist the pull of Earth’s gravity. This is often caused by particles that disturb the maelstrom of droplets and crystals to become seeds around which cloud matter coalesces. Once this happens, the seeds grow rapidly and eventually fall to the ground.

The seeds can be caused by the passage of exotic things like cosmic rays. More often, though, they are dust particles lofted high into the air. A study in 2009 showed that dust from Taklimakan desert in China, whisked above 5,000 metres, circumnavigated the globe in just 13 days. Because dust needs large horizontal distances to attain sufficient altitude, it might then cause rainfall half-way across the world.

For example, the Rocky Mountains in America push water vapour to higher altitudes that help form clouds. At that point, the theory goes, the clouds run into particles swept in from Africa and Asia. To find if that is indeed what happens Kaitlyn Suski and her colleagues at the University of California, San Diego, examined dust and clouds in Californian skies, to the Rockies’ west. They report their findings in Science.

Ms Suski needed to confirm that dust particles reached heights of about 3,000 metres or more to be able to intercept rain clouds. She also had to verify that they originated in Asia and Africa. She collected samples in an aeroplane equipped with a mass spectrometer, which can accurately determine the dust’s chemical composition. These chemical signatures were then compared with those found in Asian and African deserts. As a cross-check, Ms Suski used data from satellites like CALIPSO, which tracks dust particles’ atmospheric peregrinations.

Perhaps more interesting, Ms Suski also found that rain clouds contained bacteria, though it proved impossible to pin down their origins. Tiny living organisms can float in the atmosphere for a long time, feeding on trace carbon and any other nutrients they bump into. They can also act as cloud seeds.

In 2010 researchers in Norway concluded that bacteria are not as important to rainfall as dust is. But calculations by Ms Suski and her colleagues suggest that their rainmaking powers are amplified when they mingle with desert dust. Deserts may be some of the harshest places on the planet to live, but, if Ms Suski is right, they may be the enablers of life everywhere else.